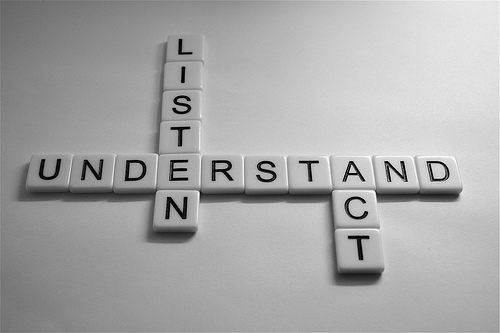 I grew up in a very conservative religious environment and “tolerance” was not a positive word. In fact, quite a few people in the churches I attended were proud to describe themselves as “intolerant” of what they perceived as wrong or evil. As I’ve spent more time in liberal circles I’ve become very interested in the concept of tolerance and I have a fundamental criticism of the basic idea. Should we be working on increasing tolerance or should we instead focus on increasing understanding?

Lets take homosexuality as our main example. It’s pretty clear at this point that the LGBT community has not been well tolerated by the rest of humanity throughout human history. But a lot of this intolerance has been the natural result of a misunderstanding of human and animal sexuality. We now know that homosexuality is widespread throughout the animal kingdom. It is perfectly natural for a small percentage of a species to be wired up for homosexual thoughts and behavior. But just because something is natural doesn’t make it good or right, if we make that move we are committing the naturalistic fallacy. We need to learn more about homosexuality before we make a judgment on it.

The American Psychiatric and Psychological Associations started seriously studying homosexuality in the 1960’s and 70’s. They eventually discovered that sexual orientation is not subjectively experienced as a choice in the vast majority of people. People do not choose their sexual orientation, it is something heavily influenced by the genes and the early experience of the fetus in the womb. Also for bisexuals and lesbians sexual orientation is often more fluid and may change over time. After decades of research it has become clear to the scientific community that LGBT orientations and experiences are a normal variation of human sexual orientation.

It is important to note that we could have discovered something completely different. LGBT attractions and behavior could have been proven to be a mental disorder. We could have lived in a world where James Dobson was right and sexual orientation could be heavily influenced by childhood experience. But we don’t live in that world. People are not blank slates and LGBT thoughts and behavior are a normal expression of the variety of human sexuality. The evidence is in, and according to the APA the evidence has been conclusive since at least 1973. Human sexuality is largely wired in and the vast majority of people do not experience attraction as a choice.

Imagine if people had actually sought out a proper understanding of the intricacies of human sexuality in only the past 2000 years. Imagine if the New Testament of the Bible had an entire chapter devoted to a deeper understanding of the complexity of sexual attraction. The Old Testament has a book called “Song of Solomon” which rather graphically describes the intricacies of heterosexual attraction, so a more open discussion of sexuality in the New Testament would not have been out of the question.

In the end, tolerance is not enough, our main goal should be understanding. Tolerance is a good start but we should proceed as soon as possible to a scientific understanding and once we have that understanding we ought to spread the word that the time for ignorance is over. It’s time to accept the overwhelming evidence, understand our LGBT brothers and sisters, and realize that human sexuality is a complicated phenomenon where people have a vanishingly small “choice” in their orientation and the expression and acceptance of that orientation is normal and healthy.